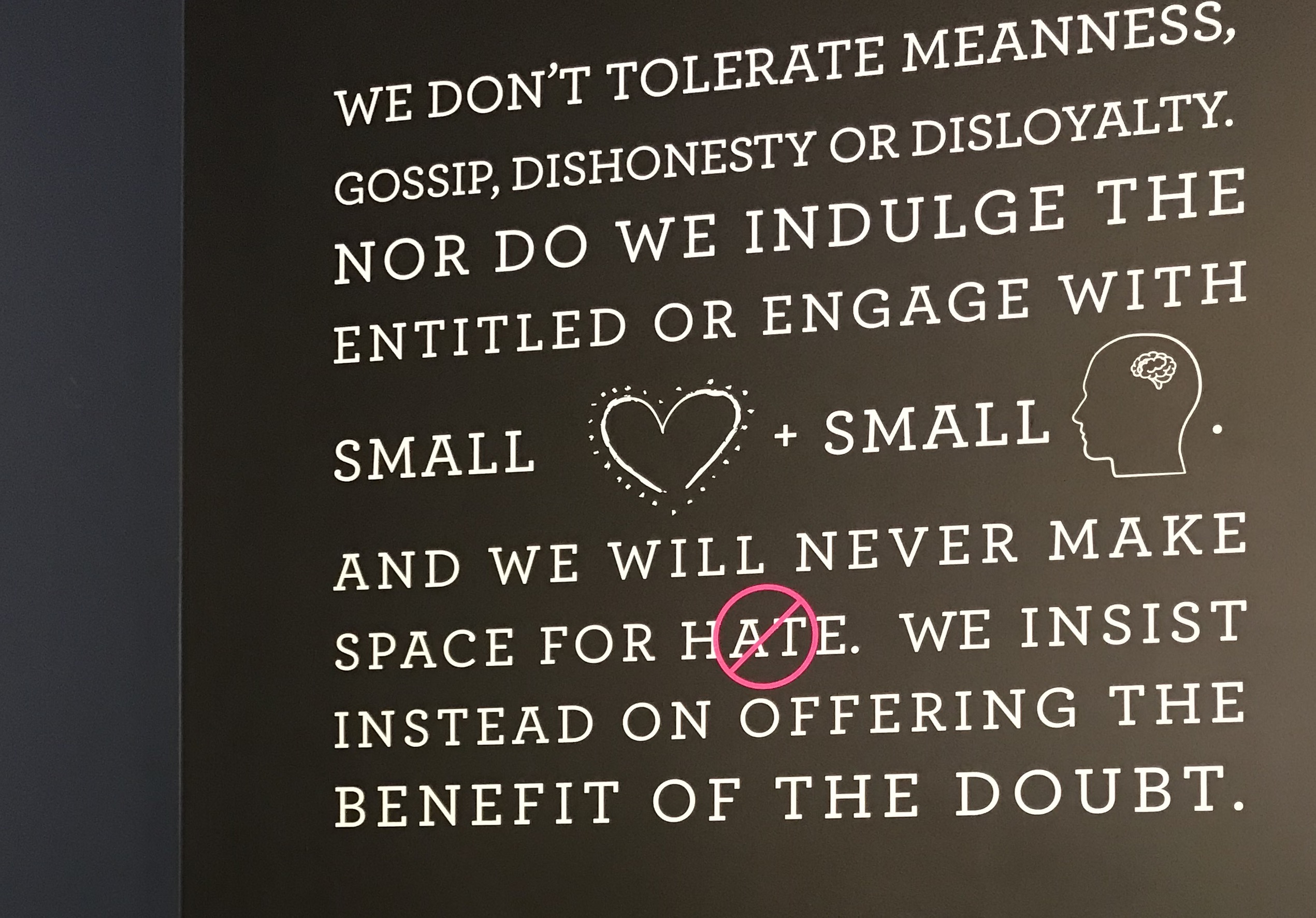 I know, I know...people say never say never but really, when we're talking about hate, isn't never the best and only word to use?

Several years ago I was at a meeting onsite at our very first Parade Home (which didn't win a single thing because we didn't earn it.  It's true.) when one of the two men I was meeting with used a homophobic slur.  At the time, we were a very small company and the two men I was meeting with were co-workers.  We were colleagues and there wasn't an obvious hierarchy I could defer to or rely on for a moment like this.  But I knew I had to say something.  I couldn't just let the moment pass. Saying nothing would have condoned using this word and I couldn't let that happen either.

I spoke up tentatively saying something like, 'you know you can't say that, right?'  I deferred to Jim's obvious authority at the time because we all worked for a company with his name on it.  'You can't say that in front of Jim, he'd be really offended.'  Then I went for it on my own account as well, 'My brother is gay.  When you use that word it's really hurtful and offensive.'

The response wasn't what I expected. And these are by no means the exact words from that conversation but these are the words and feelings as I remember them.

He said, 'oh.  ok.' He may have even said, 'Sorry, Money' I could tell he didn't intend to offend me and he wasn't going to brush me off with, 'that's just the way we talk' which was a nice surprise.  Then considering my request for a moment he said something I wasn't expecting.  He said,  'you know something that really offends me?  When you take the Lord's name in vain.  I don't like it when you both say GD.'  By both he was referring to Jim and me.

Oh jeez.  Wait, this conversation wasn't about me, was it?  Turns out, yes.  It was about all of us.

I hadn't considered my own transgressions on the matter.  Only his.  Funny how that happens, right?  We're very aware of someone else's offensive habits but sometimes a little blind to our own.

I took a page from his book and sat quietly for a second considering this with an, 'Oh.' Then quickly transitioned to seeing this moment as an opportunity.  A point of negotiation.  We both had something to say and we both needed to be heard.

I remember saying something like, 'ok I'll make you a deal, what if we both agree to no hate speech at Garman Homes.  I won't say GD and you won't use homophobic slurs.  Not just when we're in front of each other but at all.  We both agree not to use those words and we adopt a no hate speech policy.'

We agreed.  We even shook on it.  And we made good on it for the time we worked together.  Since then, I won't say I've never slipped.  I have and sometimes it was intentional and not at all a slip.  But, every time I say it, I'm aware of breaking the rule of no hate speech.  And I vow to be better.  Because I know better.

I really like this passage because it's all about boundaries.  It's about setting them and respecting them.  Yours, mine, and ours.

This passage also speaks to how our thoughts, words and actions have to stay on the high road always.  Come hell, high water and hate speech.  We stay on the high road.  We cling to the notion that no one wakes up to ruin our day.  Even though sometimes it really feels like that.

Sometimes we all do something that ruins someone's day and in that moment, offering the benefit of the doubt to someone is an act of grace.  It's how we practice being the people we want to be.  The benefit of the doubt allows someone to recover quickly after they stumble.  It allows us to trust each other and be honest about our own values.  It also reminds us that big hearts and big minds won't be sidelined by small hearts and small minds.

And as far as rumors and gossip, dishonesty and disloyalty go,  I defer to the one and only Taylor Swift on this subject.  Her song, 'New Romantics' says it best, 'baby, I can build a castle.  Out of all the bricks they threw at me.'

Lucky for us, bricks come in handy in our business!

Manifesto Series - A Home is a Sacred Space

What Our Homebuyers are Saying

Once we decided to buy, the entire Garman team was amazing, especially Kevin and Krista (in addition to Janice.) They kept us updated all through construction, and I never once did we feel stressed out or out of the loop. The final product was amazing, beyond our wildest dreams. It truly is our dream house. I would highly recommend using them, not only for their personal touch, style, creativeness, ease, craftsmanship - but because they truly care about their customers, and want to help you live your dreams!

Once we decided to buy, the entire Garman team was amazing, especially Kevin and Krista (in addition to Janice.) They kept us updated all through construction, and I never once did we feel stressed out or out of the loop. The final product was amazing, beyond our wildest dreams. It truly is our dream house. I would highly recommend using them, not only for their personal touch, style, creativeness, ease, craftsmanship - but because they truly care about their customers, and want to help you live your dreams!

If You Have Questions,We Have Your Answers

Our Team Can Get You StartedOn Your Dream Home Today!

Send a Message
©2020 Fresh Paint by Garman. All Rights Reserved.

©2020 Fresh Paint by Garman. All Rights Reserved.Site By Builder Designs